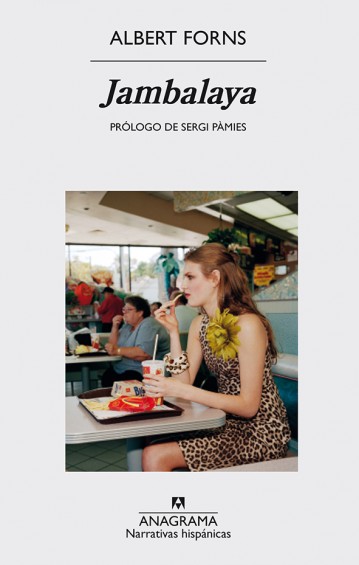 Jambalaya is a travel book about a small fishing village recycled into a paradise for hipsters and surfers from New York. The diary of a young writer who describes his oddities while trying to fend off a plague of insects. A dictionary of synonyms and a treatise on masturbation. The story of the life together of a group of writers of diverse origins living on an isolated farm. An essay on gentrification, neuromarketing, obesity and the effects of urban dispersion on the mental and physical health of the American population. A reconstruction of how Max Frisch wrote his novel Montauk. A collection of postcards that tell us of dogs that bark, but don’t bite, and parrots who look like they have swallowed all the emojis that Whatsapp has to offer. An investigation into the uses and customs (and the percentages and vices!) of literary people. An essay about the question of pornography in the internet age. A gallery of portraits of all kinds of entrepreneurs. A succulent dialogue between the veteran writer Edward Albee and his young disciples. A celebration of object-architecture and a catalogue of documentary photos. And also a love story. Or various love stories. Written with a dose of wit and an agile and bright prose, Albert Forns, one of the most outstanding authors of his generation, takes another step in his journey through the mechanisms of biographical fiction, offering us what seems like a comic making of about the writing of a book. A making of which is, in reality, a fine novel about ‘second novel syndrome’.

«A mosaic novel in which the main engine is the narrator, an angry and angering narrator (and precisely because of that, a fascinating one)» (Laura Fernández, El Mundo).

«A magnificent fictional autobiography. A delicious literary feast. With the excuse of a severe case of writer’s block, Forns decides to write an autobiography about  autobiography, an exploration of the limits of the self in literature and of onanism as both sex act and literary style. And the pleasure, ultimately, is as much ours as his» (Maiol Roger, El País).

«An earnest book with a fast pace and a free and fluid prose. A book that is unusually refreshing, interesting, very contemporary, unclassifiable and fun» (Josep Clavera, El 9 Nou).

«Jambalaya confirms Albert Forns as one of the most interesting authors of new Catalan literature» (Pere Antoni Pons, Ara).

«A patchwork quilt of a novel sewn with stories full of humour, lyricism, iconoclasm and bitterness by a writer who had already impressed me with his first book. An intoxicating novel» (Biel Mesquida, Diario de Mallorca).

Albert Forns (Granollers, 1982) is a journalist and writer. He works at the Centre de Cultura Contemporània de Barcelona and collaborates with the newspaper Ara and the magazines Time Out Barcelona and L'Avenç. He won the Premi Documenta with his first novel Albert Serra (la novel·la, no el cineasta) (Empúries, 2013). He is the author of the poetry collection Ultracolors (La Breu Edicions, 2013).