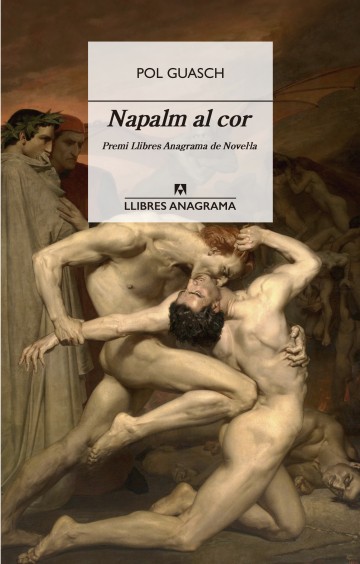 Napalm in our Hearts

“Sometimes I feel like I’m writing down the future. I tell myself that, in the face of misunderstanding, the words should be there. Someone, maybe, will understand them,” says the narrator of the story. And, in fact, Napalm in Our Hearts is something of an exercise in the intimate understanding of an extreme and traumatic past, and the sentimental mapping of a tumultuous present in the search for some kind of freedom.

Set in an ambiguous geography, Pol Guasch’s first novel features a pair of boys who have grown up in a militarized zone. Their lives have been impacted by precarious living conditions, an environment that is intolerant of their desire, and families that have been uprooted. The lack of prospects is pervasive, but they hang on to the possibility of letting themselves be dazzled and even submitting, of embracing militancy and the temptation of violence, and of continuing to speak a language that is falling to pieces: their own.

The only alternative is to flee that barren land. On their journey beyond the “other side”, literally carrying the weight of the past in the form of a letter and a dead body to bury, they’ll find different answers to shared mysteries. Pieced together delicately like a mosaic, written with precision and beauty, Napalm in Our Hearts offers a vivid allegory of the various oppressions that determine so many lives, but also of the fine line that sometimes separates victim from executioner.

According to the 2021 Anagrama Novel Prize jury:

«The voice that speaks to us from Napalm in Our Hearts, innocent and brutal at the same time, like the boy from ‘La guerra’ by Carner and the teenager from Quanta, quanta guerra... by Rodoreda, drops us into the middle of the terrifying forest of children’s stories and into the human condition. It is one of those novels that, as Kafka said, affects us like a disaster and helps us break open the frozen sea within us»  (Mita Casacuberta).

«“Pol Guasch took on the dystopian genre from a poet’s perspective and came up with a suggestive post-nuclear novel set in the most marginal of margins. Napalm in Our Hearts (…) will captivate the reader with a surprising combination: the sense of suffocation that dominates the world he describes and the voluptuous language he uses in those descriptions» (Guillem Gisbert).

And the critics said:

«I read Napalm al cor by the young Pol Guasch, winner of the Anagrama Prize, in a weekend. It is a book that is as strange as it is fascinating, grand poetry turned into prose. Highly recommended for its enormous sensibility and great literary solidity» (Jordi Basté, La Vanguardia).

«A poetic story, raw, brutal...At the heart of the novel lies a solid political discourse that is not ambiguous in the slightest» (Ot Bou Costa, Vilaweb).

«Napalm al cor proposes very tough approches and fragmented linearity...In philosophical terms, we could say that it is an exercise in humanistic critique» (Gerard E. Our, Núvol).

«With images of devastation, Pol Guasch debuts as a novelist with a dysptopia about climate collapse, the body, and language. Napalm al cor is a book about family grief, about the passion and love between men. About the need for love that drives the protagonist to dive deep into himself» (Julià Guillamon, La Vanguardia).

«Pol Guasch is one of the prodigal young people of our literary universe. (…) A novel that comes to life with poetic prose and a dystopian aesthetic and becomes one of the referential titles of Catalan literature of the early 21st century. You still haven’t read it?» (Oriol Rodríguez, El Nacional—Revers).

«Presented as a remote science fiction story in a post-human time, this allegory not only reflects on the dynamics of power, but also on the weight of legacy—made out of misery, of course, but also incandescent desire. (…) Guasch’s language is contemporary, sparkling, capable of describing the nuances of reality with an inner light. Prose that overflows with the sensibility of a poet-author» (Valèria Gaillard, El Periódico) .

«This is the first novel by the writer from Tarragona. A well-crafted story where Guasch presents us with a dystopia about repression starring a pair of boys who try to flee from a militarized zone that represents a reality that is highly intolerable» (Antonio Lucas & Luis Alemany, 30 Best Books of 2021, El Mundo).

«Guasch, who has already published a few poetry collections, explains that he approaches literature in the same way: from a place of joy and pleasure. [Pol Guasch] is of the opinion that literature should not appease readers with answers, but rather accompany them. For this novel, he wanted to create a novelistic form that served to structure Napalm al cor, but that he isn’t sure will live beyond this novel» (Rac 1) .

«Only 24 years old and with a couple of published poetry collections, Guasch is the youngest author to win the Llibres Anagrama Prize, a wise award when it comes to launching new talent. Napalm al cor is a simultaneously suffocating and poetic dystopia about the repression of power in a militarized zone where two boys suffer from a lack of tolerance for their desires and language, from instability, and from uprooting» (Elena Hevia, El Periódico).

«There may be no hope for the rules of men, but there is hope for life and its unbreakable natural cycles. And these characters cling to them when they need to in order to survive, with animalistic instincts that Guasch, little by little, consecrates... Readers enter an imprecise spiritual dimension where barbarism and love are ultimately almost inseparable (…) Napalm is a war fuel that explodes intensely, that burns slowly (…) and then, in the midst of the apparent stillness—which is not really stillness but rather apnea—begins a major synesthetic celebration that both softens and emphasizes the constant brutality of the work. That’s when the novelist shows us that he is, above all else, a poet» (Mònica Boixader, Núvol).

«Napalm al cor is a novel written with intelligence and sensibility. The story it tells is as distressing as it is seductive (what is it about ruins that makes us feel so drawn to them?)… One of the things that makes the novel work is that readers can, in some way, feel like they’re in the epicenter of this abandonment. Or, at the very least, it’s easy for them to feel the protagonist’s existential drama. After all, we’ve all fed into our internal dystopias at one moment for another so we can strengthen the feeling of wanting to escape them. Novels like Napalm al cor make Catalan literature a little greater» (Manel Haro, Llegir.cat).

«Beyond the dystopian elements, Napalm al cor is a novel that centers on the effects of the disintegration of a family (…) But the novel is, above all, a passionate story of love and desire between the protagonist and his lover Boris, a relationship that moves between the dreamlike and the delirium of fleeing beyond the border told through the things they share with each other and a series of lyrical letters. Their emotion certainly does not measure up to the explosive strength of the catastrophic reality in which it develops»  (Ponç Puigdevall, El País—Quadern). 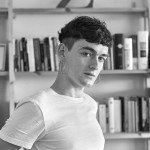 Pol Guasch (Tarragona, 1997) has published the poetry collections Tanta gana and La part del foc and won the Anagrama Award 2021 with his first novel Napalm in the Heart. He has studied Literary Theory (University of Barcelona), holds a master's degree in Cultural Studies (UB), in the Independent Studies Program (Museum of Contemporary Art of Barcelona) and in Contemporary Literature, Culture & Theory (King's College London). He has been an associate professor of literature at the University of Barcelona and currently works as a cultural producer. Guasch has been a writer-in-residence at Santa Maddalena Foundation (Italy), and has received different literary creation grants, such as Beques Premis Ciutat de Barcelona 2020 or the Literary Creation Grant from the Government of Catalonia.