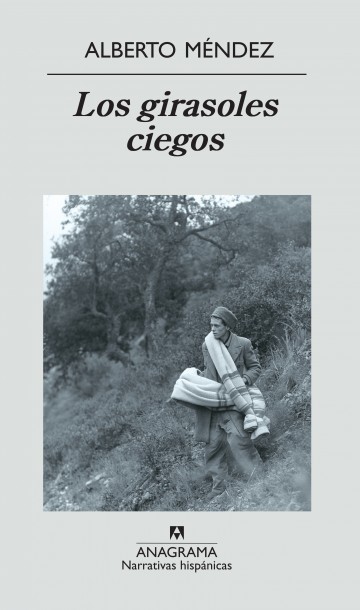 READ AN EXCERPT IN ENGLISH

A Captain of Franco´s army, the same day as the victory, renounces winning the war; a young poet runs away with his pregnant girlfriend to grow up quickly and die within a few months; a prisioner in Porlier´s jail, who refuses to live a lie so that the executioner can be designated as executioner, and a lustful deacon who hides his lust behind the apostolic fascism that clamours for the purifying blood of the defeated. These are stories from silent times, when it was scary that anyone knew that you knew. Four subtly connected stories, narrated with the same language but with the individual styles of the different narrators that shape the true main protagonist of this story: defeat.

"No one arrives further than Alberto Méndez. Los girasoles ciegos has the mark and the delirium of a book meditated throughout a lifetime; each line resonates as if it were the author’s last.... Los girasoles ciegos is, certainly, an exemplary book about the consequences of the Spanish Civil War. It contributes, from the most fervent literary dedication, to a non-falsified normalization of our historical legacy" Francisco Solano, EL PAÍS .

"A first novel by an author, born in 1941, who I strongly recommend - not just as a critic, but as the reader without judgments or prejudices that I became from the first page... Los girasoles ciegos: a beautiful and suggestive title for an splendid novel" J.A. Masoliver Ródenas, LA VANGUARDIA.

"We are facing one of the most intense and original books to have been published in Spain in recent years... There is a strange and fascinating efficiency of language: bare, sharp and with a very adjusted poetic flair that goes straight to the point without false lyricisms" Juan Ángel Juristo, ABC .

"Maybe it is the quality of uniting a prose of great formal beauty, together with a remarkable verisimilitude of the heartbreaking passion of the book´s characters that is the main, essential quality in the prose of Alberto Méndez" Joaquín Arnáiz, LA RAZÓN .

"In his literary debut, Méndez displays a well-rounded and impeccable prose, with a style that envelopes the reader with that terrible atmosphere that surrounded the country, from the front-line to the crowded prisons" José Luis Solanilla, HERALDO DE ARAGÓN .

"The style condenses, the prose becomes nerve, and a feeling of anguish invades the reader before the tragedy and the profound humanity of what is being told. The text touches the soul deeply. Read it" Antonio Garrido, DIARIO DE CÓRDOBA

"I dare to forecast that this is one of those rare books that will satisfy all kinds of readers... Very few times, like on this occasion, the jury of the Critics´ Prize has felt so pleased with its decision". Fernando Valls, QUIMERA

Alberto Méndez (Madrid, 1941-2004) studied in Rome and graduated in Literature and Philosophy from the Universidad Complutense de Madrid. He always worked in national and international publishing companies. He was awarded the Setenil Prize (a prize to the best short-stories book published in Spain) for Los girasoles ciegos in 2004 And in 2005 The Critics’ Prize, awarded for the first time to a posthumous book, and the National Prize for Literature.