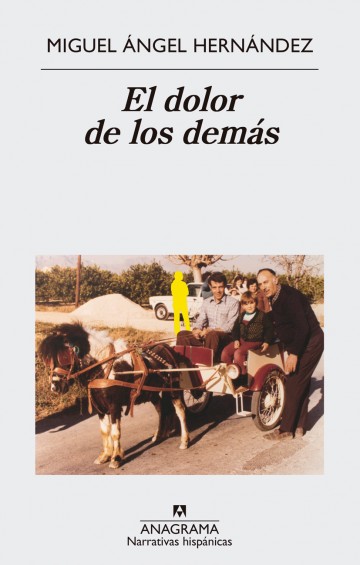 The Pain of Others

Gritty and honest, poised midway between a thriller and an autobiographical confession, harking back to authors such as Emmanuel Carrère, Javier Cercas and Delphine de Vigan, Miguel Ángel Hernández’s third novel is a quantum leap forward in the construction of a highly personal, solid and consistent body of work.

On Christmas Eve 1995, Miguel Ángel Hernández’s closest friend murdered his own sister, before leaping to his death from a clifftop. The events took place in a small countryhouse in Murcia’s farmlands . The motive would remain forever unknown. The case was closed and the crime was banished to oblivion. Twenty years later, when the wounds appeared to have finally healed, Hernández decides to return to the farmhouse, where, taking on the role of detective, he attempts to reconstruct the events of the tragic night on which his adolescence came to an end. But traveling back in time is a sure way of altering the past, and his investigations into his friend’s crime will awaken ghosts he thought long forgotten.

«An absorbing book, a seamless honesty, a magnificent novel without fiction» — Javier Cercas, author of Soldiers of Salamis

«The author as host and guest in his own story. A mediation on writing, a friend who murders his sister then takes his own life, who appears out of the blue in a photograph, an investigation, a portrait of Spain in the 90s and, in short, an outstanding novel by Miguel Ángel Hernández» — Fernando Aramburu, author of Fatherland

«It is not surprising that the author who built the marvelous architecture of Patria praises El dolor de los demás and its double narrative plan, in which the inner world of those who investigate alternates with the investigation of reality. And reality is full of ghosts» — Paolo Lepri, Corriere della Sera