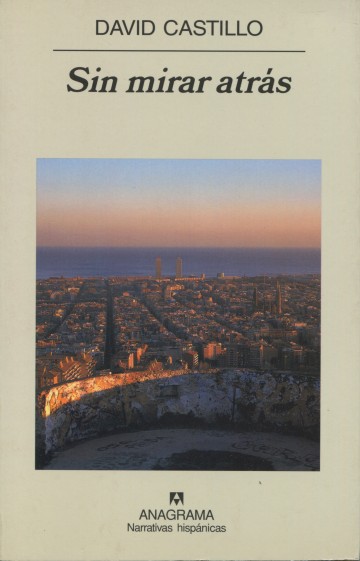 Sin mirar atrás is an emotional thriller with the same main character as in the first novel by the author. In this story, Dani Cajal who had travelled from prison in Barcelona to the Nicaragua of the Sandinista revolution, earns his living in Barcelona as a journalist and writer. Between hesitations and routines, he keeps alive a difficult relationship with his young lover Clara, daughter of a figure from the republican exile. Located at the change of the century, the novel starts with the death of a close friend in the prison of Zaragoza. The investigation about the reasons behind his death will cause him to re-encounter old colleagues from the days of the political struggle and to regain a past that soon becomes an illness of the conscience. Along a succession of landscapes - Barcelona during the Olympic Games, Rio de Janeiro and Morocco- Sin mirar atrás is a novel to be read with sustained interest, sprinkled with reflections that go from the stoic to the extravagant, with a powerful and dynamic rhythm and a warm and agile prose.

David Castillo (Barcelona, 1961) is a poet, critic and, since 1989, director of the cultural supplement of the local newspaper Avui. As a teenager, he took part in the the counter-culture movement, born in Barcelona during the dictatorship, as it emerged from the underground. During the 80s he was a collaborator with various newspapers and literary magazines, both in Madrid and in Barcelona. Has been awarded various prizes for his criticism and journalism. His novel, El cielo del infierno was granted the Crexells Prize for the best Catalan novel in 1999 and Sin mirar atrás, the Sant Jordi Prize, 2003.