The Language of the Game

The Montaño family originates from the north of Mexico, from this vast country whose name Daniel Sada subverts and calls Mágico. The father, Valente, has illegally crossed the border on 18 separate occasions, but no more, never again, because he has saved enough money to avoid such efforts, so many games of cat and mouse, so many nocturnal crossings, so many rebellions against border patrol, so many failures and having to begin again... now he is ready to start up his own business in his hometown San Gregorio, it is a modest business but it is his. Just as much as the little house that he built with the help of his son, Candelario. Using this money that was so difficult to earn, and the experience he gained when he escaped first from an agricultural centre and then from the well-groomed and fanatical Mormons that helped him with his first escape, and ending up making pizzas in Pasadena, Valente decides to open his own pizzeria in the middle of this world of tortillas. He will run it himself, the maestro pizza chef, with the help of his children, Candelario and Martina. And perhaps, only perhaps, will his wife Yolanda intervene, who prefers to secretly follow with her business of washing and ironing clothes for her neighbours.

But San Gregorio is in the Mágico that is Mexico, and the youngster Candelario doesn’t completely understand the logic behind investing everything, all that money and effort, into such a business: he knows that in the town insecurity is beginning to surface, and notices that every now and then strange vehicles are spotted. Nothing yet has occurred there, but heavy rumours abound of the dead strung up in the surrounding areas. Valente, on the other hand, maintains that there is no need to live in fear, that it does not suit, and that crimes occur even in the most beautiful paradises. So the pizzeria opens, and a short time afterwards, once everything has begun to go well, Candelario decides to try the forbidden fruit: the marijuana that grows in the garden of an old friend. His name is Monico Zorilla, the son of the landowner Virgilio Zorilla, a friend of one drug trafficker, and an enemy of another…

«Is it enough to say that El lenguaje del juego is extraordinary? Sada has bequeathed to us his dazzling personal explanation for the violence in Mexico… As soon as one thinks it over twice, it becomes clear that all of his books repeat this conviction: that literature can create a voice that emerges from the darkness, and he looks to tell these fascinating stories with unrivalled style. Because it knows where it is heading, and if not it invents as it goes along, this voice has an obligation to examine the most antiquated Spanish, that which is spoken on the streets, to choose whatever is convenient and with this create a story, verses that surprise us or make us laugh on the darkest of days. It is in this way that Daniel Sada writes.» (Martin Solares, El Informador).

«One of the most solid and original voices of contemporary Mexican narrative… The highest and most recognisable expression of the Mexican language… The result is a ruthless document about the drug cartels, transformed into fevered fiction… Its vigour, its sense of it all being a game, and its desolate criticism, it is all shocking, written the way it is, as a product of the frenzy of life.» (J. A. Masoliver Ródenas, La Vanguardia).

«If we were capable of imagining a single text outlined by the destructive insanity of Malcolm Lowry, the pain-stricken orality of Juan Rulfo and the mythological strength of Carlos Fuentes, Daniel Sada would be one of the most promising candidates to achieve the impossible… The Language of the Game a devastating, desolate, insane and bloody novel. The reader does not end up comprehending how after so much bloodshed and death (the tricky terrain of the drug trafficker and the struggle among the cartels for power provides the opportunity to set up such a catastrophic scenario) desolation can become inspiration, devastation can become renovation, and on like this as far as you want to take it.» (Ricardo Baixeras, El Periódico).

«Agile yet baroque prose, it’s sharp, and very aesthetic. There is a tremor that breaks the reader’s routine, the prose is lively yet baroque, abrupt, and very aesthetic. It is a tremor that breaks the routine of the reader, violates him in the comfort of his own chair. “We begin with parsimony”, the book begins, and ends in the reader’s astonished horror. Art also serves to shoot one in the guts.» (J Seoane Riveira, La Voz de Galicia).

«His prose is dazzling and the result works very well… Daniel Sada offers en The Language of the Game his vision of Mexican violence. It is a moral and ill-fated vision, deeply classical, which should be diametrically opposed to the narcoliterature which tends to fascinate due to its brutality and the extravagance of the criminals. Add this to the language, which is exuberant. Sada is an expert in euphony, a melodic prose writer who understands the profoundly creative and colloquial Mexican tone in order to thrust it upwards to the heights of great literature.» (Pablo Martínez Zarracina, El Correo Español.)

The Legacy of Sada, by J.A. MASOLIVER RÓDENAS, La Vanguardia:

It is inevitable that when talking about Daniel Sada (Mexicali, 1953- México City, 2011) Roberto Bolaño springs to mind. Not only for the mutual admiration they shared: “From my generation I admire Daniel Sada, whose writing project seems to me to be the most daring”- but also due to the desire to continue, even when threatened by death. El Lenguaje del juego, a novel which he handed to his editor Jorge Herralde just before he died, has appeared at a time when, after many years of passing unnoticed, he is finally being recognised as one of the strongest and most original voices of contemporary Mexican narrative.

What seemed at one time to be a dark language, excessively bonded to the rhythms of traditional verse, was transformed into the highest and most recognisable expression of the Mexican language, thanks to the original integration of educated and popular registers and an extraordinary ear. This was the same experience José María Arguedas had in Peru with his integration of the quechuan spirit into the Spanish language.

El lenguaje del juego is not a ´rescued` novel, the common occurrence of an unpublished book rejected in life by the author being later dug out for commercial reasons. It is written with the same conviction as he wrote his best novels, among them the one that marked his definitive recognition, Porque parece mentira la verdad nunca se sabe. The geographical framework has expanded and now we leave the desert to cover the complete geography of Mexico, because this is exactly what has occurred with drug trafficking. The names of places are changed, more for the sake of poking fun than to hide some kind of clue. Mexico becomes Magico, Monterrey becomes Montmoney, Puerto Vallarta becomes Puerto Vallarma, Acapulco becomes Acaluco, Zacatecas becomes Zacalucas or The United States in Gringoland. In this way I attempt to highlight one of the most prominent aspects of the novel: the grotesque reality of the Mexican life, without denying the tragic and the sentimental. The result is a merciless documentation of the drug cartels transformed into a fevered fiction.

The centre of the action takes place in San Gregorio, strategically placed in the middle of the country that has experienced a similar development to the Macondo of García Marquez; but the fever of the banana tree is substituted for that of drugs, shown by the wars fought between the rival cartels. Soon the dead are spotted all around, “mutilated persons hung from the trees in places where the people could see them with demented bewilderment.”

The human nucleus is the Montaño family. Valente, the father, has crossed the northern frontier illegally around 18 times, until he decides to set up a pizzeria with the help of his wife Yolanda. His daughter, Martina, wants to leave home, but finally chooses to “take advantage of the splendent; her breasts bulging, her nose turned-up” and find herself a husband. Her brother, Candelario, thanks to the friendship he has with Mónico Zorilla, far richer than he, finds himself introduced into the world of drugs and earning very large sums of money.

With drug trafficking comes violence and we find ourselves entering into a delirious spiral, including the ´journey´ of the nark Virgilio and his son Mónico, a metaphor for the entire novel. Sada, with his interventions, makes it very clear that he is in charge of the tale, of its metamorphosis from what is real into fiction precisely in order to underline the sense of unreality present in reality. “About this we will speak later”, “but we will go chapter by chapter, travelling far back”, “what should now be confronted…”. The vitality, the sense of a game being played, the desolate criticism, the strength of a few words that contain no hint of a goodbye, it is all shocking, written they way they are from the perspective of a frantic pace. 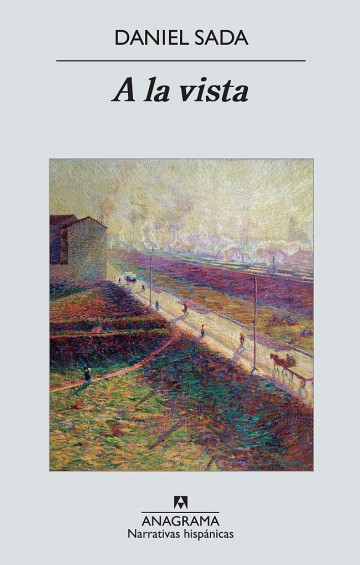