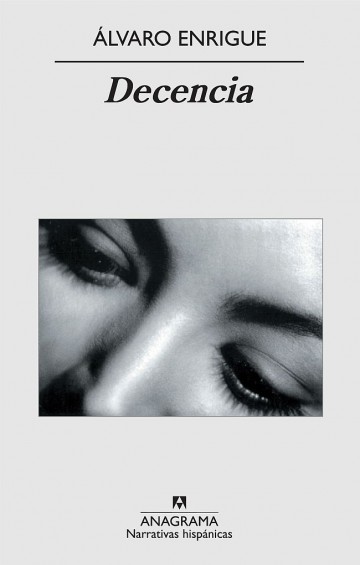 Even though Decencia is a novel that meditates upon the topography of time, its folds, circles and valleys, it is also a book written with sweat and saliva: An old man is kidnapped by a couple of revolutionaries in the 1960s. A boy finds the Mexican Revolution exploding in his face at the beginning of the twentieth century. The old man remembers the young boy he once was; and the boy imagines the old man he will become. Among all this are the facts that help one to understand the other: the first cigarette, the first film, the first death, the “seedy eyes of Osorio”, the Archangel  Cisniegas, comrade and assassin of all revolutionaries.

Decencia both celebrates and parodies with equal vehemence the totalitarian ambitions of all the great Latin American narratives. Instead of adding and subtracting, it cuts right through, opening and closing angles, and leaving us breathless.  Both a bildungsroman subverted by re-lived experience and a road novel that last 100 years.  Álvaro Enrigue’s books are known for the violence with which they challenge the frontiers of the novel, plumbing the depths of literary genres with one aim: to challenge the rules of time—inexorably rigid and lineal—with the logic of the flexibility of language. There is only one axiom that the reader must follow to enter into the world of Decencia: the future can change the past and we are all able to remember what is yet to come.

«The narrative strategy of this brilliant author reaches a climax in pages that are filled with an irresistible, volcanic power» (Carlos Fuentes, El País, Madrid)

«Enrigue is a marvellous writer, always on the look out for a felicitous sentence, intelligent and with a highly subtle sense of humour» (Edmundo Paz Soldán, Letras Libres, México D.F.).

«Enrigue is profoundly conscious of the history of Latin American literature and, with the literary skill of Borges (but without the solemnity of his imitators), he writes with the miniaturist precision of  Vila-Matas, the dry and savage lyricism of  Bolaño and, beating all over the place,  the heart of Bryce Echenique... The author captures with pain and joy the moments of existence of a man who hears the crack with which the vulgarity of the world breaks when life becomes beauty, tragedy and feeling» (Juan Ignacio Boido, Página 12, Buenos Aires).

«Decencia is the story of a boy who witnesses the outbreak of the Mexican revolution and of an old man, bitter with regret, who is opportunistically kidnapped by a tiny and disorganised leftwing  revolutionary cell in the 1970s. Both characters are the same person, simultaneously representing two periods of Mexican history characterised by political violence. The author establishes a parallel between them: the first is depicted as tragedy, the second as farce... A demonstration that within the tragedy of history, there is always farce» (Patricio Pron, ABC).

«Against the arguments of pure revolutionaries, there is now a counter-argument that warns that behind every revolution, there is some dirt. Decencia subscribes to this argument, with a commitment to an ethics of writing and a revision of Mexican historical myths» (Ángel Berlanda, Radar, Página 12).

«With comedic style, unvanquished humour and refreshing scepticism, the story  runs through a century without melodrama or didactic objectives,  guided by an unconventional but convincing author  who brilliantly measures the tense tale of a kidnapping and a desperate escape coloured with the stories of Longinos’ achievements in love, alcohol, cinema and politics»  (Rodrigo Pinto, Babelia, El País).

«An excellent writer, intelligent, in possession of a subtle sense of humour and always capable of finding a well-turned sentence. His work includes, among others, Hipotermia, an original book of short stories, and the novel Vidas perpendiculares. A very interesting author who should be watched closely» (Ángel M. Salazar, Deia).

«It’s rare to have the sensation of reading a future best-seller. In Decencia there is an unexpected profundity, an audacious use of language and  a precise and complex stylistic framework ... (the author) is one of the transcendent voices  in Mexican literature. The story isn’t simple: it occurs during two different times, exploring in both the past and the present a singular and tragicomic vision of Mexico. This is an anti-epic novel where a procession of iconic registers are blown up by the uncompromising humour of Enrigue» (Mónica Maristain, Página 12)

«The Mexican writer Álvaro Enrigue surprises us with a novel on the history of his country, from the Revolution to the arrival of the narco-traffic with the cartel of Guadalajara. He directs his ironical and harsh prose against the ruling classes, his novel has already infuriated people in Mexico» (Semana, Colombia).

«Decencia is a wicked tragicomedy and a lucid love offering. The reader will laugh while turning the pages, but it is also a hair-raising novel» (Enric Soria, Ara).

«Álvaro Enrigue has given a peculiar and elegant tone to this book with a style as eccentric as it is charming. At the beginning of his career this was only only visible in flashes, but it has now become a bright light that illuminates contemporary Mexican fiction with one of its most charismatic proses» (Jorge Degetau, Este País).

«Decencia, the excellent novel by the Mexican author, Álvaro Enrigue, helps us understand what such a damn violent enormity as Mexico is all about» (Juan Manuel Vial, La Tercera).

Decencia has been selected in www.newspanishbooks.de in the section "Buchtipps unserer Experten" as one of the most appropriate novels for its translation and commercialization in the German speaking market.