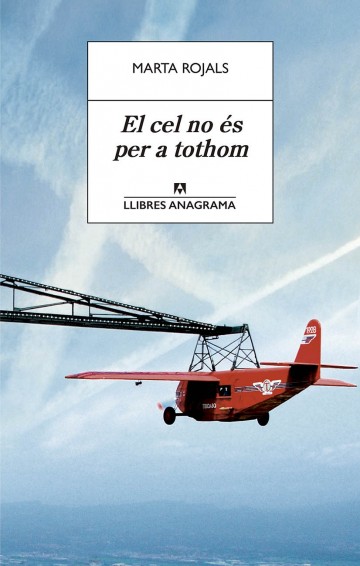 The Sky Is Not For Everyone

El cel no és per a tothom

Pep Costa knows from experience that relationships between brothers and sisters can be difficult to explain. Words don’t suffice because they fail to highlight the nuances, the codes, the ins and outs over the years, and that’s why it’s better to keep quiet and carry on. His older sisters Eva and Sara—the twins—are always fighting and haven’t even spoken to each other in years. But Eva, always temperamental, has an emergency which forces her to visit Sara, and this time it falls on Pep to mediate. It’s September 2007 and a countdown starts that can change everything.

The Sky Is Not For Everyone recreates four decades of the subtle game that is family life, along with its crashes. The efforts to connect despite the illness of a father that sublimates his love for planes by building models of them, and the recriminations of a mother whose only moments of lightness, throughout a life of bitterness, are when she is working at the hair salon. The difficulties, the sacrifices and the betrayals of the three children to make their dreams to fly and leave come true. It is also forty years of social, politic, economic and urbanistic changes in a country whose scenery –land, sea and air – transform before the eyes of the reader as life’s diorama.

In this, her third novel, Marta Rojals demonstrates her genius for language both in description and dialogues, her innate talent to create eloquent narrative structures and her ability to delve deep into her characters’ psychologies that allows her to add a whole new roster of memorable characters to the Èlia of Primavera, estiu, etcètera and Anna of L’altra.

“Under the appearance of a realistic novel, The Sky Is Not For Everyone is a symbolic and psychologic story with characters who are people, dialogues that work wonderfully, and a minimalistic plot, that allows the writer to pull all her narrative resources (…) Few authors are able to write a book with such human density, such natural diction and such a symbolic counterbalance, barely forced, and that explains so much.” —Julià Guillamon, La Vanguardia.

“Book after book she built her fame, each one better than the previous (...) Her third novel, El cel no és per a tothom, hot off the presses, has a recipe to success and to become the book of the year in Catalan. An oppressive family story, hyperrealist as her previous works, about two twins, Eva and Sara, who are like chalk and cheese, and a third sibling, Pep, who will try to mediate between them” —Elena Hevia, El Periódico.

“Narrated with extraordinary tension and a high level of sophistication of narrative architecture, linguistic rigor and impeccable stylistic solvency (...) The entire novel is built on an impeccable crescendo and, as good literature does, the story does not opt for an obvious categorization. It only displays the dirty insides of a structure: the family, which seems to be the vital core of our society, and leads us to smell its appalling stench” —Marina Espasa, Diari Ara.

“Former novel readers who now watch TV series will discover a mine of fascinating observations dissolved in a narration which never loses its narrative pulse. And if there is an adult novel reader left out there, they will find one of the best works of the decade” —Bernat Puigtobella, Núvol.

“Its realism is not magical. It is so real that it conveys the literary as intimate with the exact distance not to fall into nostalgia or sentimentality. The command of the language, the phrases together with the contemporary spirit make it prevail. Its characters move the reader” —Assumpció Maresma, Vilaweb.

MARTA ROJALS (1975) was born in la Ribera d’Ebre (Tarragona). She holds a bachelor’s degree in Architecture from the Universitat Politècnica de Catalunya. She is also a translator and a freelance editor. She wrote the novels Primavera, estiu, etcètera, 2011, (‘Spring, Summer, etcetera’), and L’altra, 2014, (‘The Other One’), which gained recognition from critics and readers. Her second work was translated into French, Italian, Dutch and Czech.