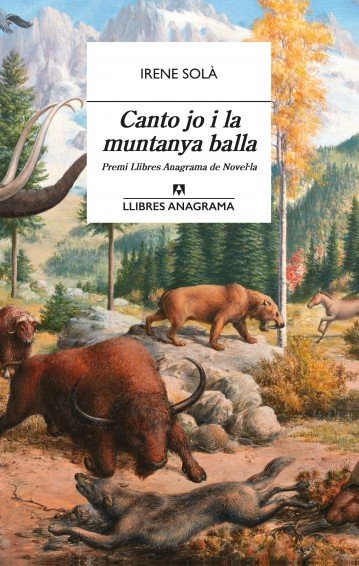 When I Sing The Mountain Dances

1960s. Domènec, a peasant and a poet, and Sió, his wife, a beautiful and determined girl, move to Matavaques, his country house, in an area of high mountains close to the border with France. During one of their customary walks, Domènec dies hit by lightning  in the middle of a storm. Sió must carry on running the farm and the education of their children Mia and Hilari, who are still very young.

1970s. The children grow up a bit wild, due to their isolation as well as Sió’s attitude, as she can’t overcome the death of her husband. The local legends (water maidens, victims of the witch hunt of the Middle Ages and the memory still alive of the Republicans who went into exile just in this part of the world) and the landscape of the Pyrenees shape the imagination and sensibility of these children who have a wonderful friendship with a neighbor their age—the strong and mysterious Jaume.

End of 1980s. Hilari inherits his father’s interest in poetry; Mia is a responsible older sister. Time passes and Jaume and Mia enter into a relationship. The discovery of the world is also a discovery of their bodies. But one day, when they are just 20, Hilari and Jaume go hunting venison and Jaume accidentally kills Hilari. Condemned for gross negligence and consumed by guilt, Jaume cuts off all contact with Mia. When he get out of prison he never returns to the village.

Second decade of 2000s. Mia is a shy woman who lives with the only company of her dog Lluna. In her house there is a presence, a bad vibe that only her neighbor Neus will be able to expel for she is gifted. Neus’s daughter, Cristina, who used to observe Mia and Jaume when they went on their walks, is back in town after some years away and will try to help Mia exit the hole she has voluntarily locked herself up in all these years. One night where he has drunk too much at the bar where he works as a cook, Jaume runs over a venison with his car. When he realizes that the animal is still alive, he feels the impulse to go back to Matavaques to finally talk to Mia.

With an overflowing and contagious energy, Solà has written a tight novel with a beautiful prose full of textures and a daring game of points of views.

"Irene Solà's book grabs you through a combination of intensity and talent as well as great irreverence and courage to use tradition and put it at the service of a modern literary approach." – Sergi Pàmies

"The future is Irene Solà looking into the past" – Marta Orriols, author of Aprender a hablar con las plantas

"You don't leave this book the same way you came into it. And you don't leave easily: the traces it leaves are lasting, perhaps indelible." –Imma Monsó

"Irene Solà bases her novel on certain Catalan legends. The rest is a product of her imagination, a product of her desire to vindicate the dialogue between men and women and the luck that befalls them -- or the luck they have sought for themselves or that they yearn to someday escape from (...) Her protagonists distribute their lives -- happier ones, more unfortunate ones, resigned ones -- throughout chapters in which all of the novel's characters have a voice. The bolts of lightning have a voice, and they know when they are doing something wrong. The legends take part in the celebration of imagination, and they do it in a way makes whether what we're reading is fact or fiction irrelevant: it moves us either way. Or interrogates us (...) The distress and the desire for redemption are devastating, when someone mistakes the resounding shot that will forever ring in their memory. The stories told in this beautiful book (as though they were each independent), tell tales of a pastoral euphoria. Nature, similar to us, is there, waiting for us." – J. Ernesto Ayala-Dip, Babelia, El País

"It transmits the joy of imagination without at any point concealing the obstacles that come with life's incessant challenges… The entire novel emits light, hope, and vitality… As Marc Chagall said: art seems to be above all a state of soul, and readers of Canto jo i la muntanya balla (When I Sing the Mountain Dances) can sense this from the beginning until the end, where Solà concludes her novel with a flourish of high literary caliber. Canto jo i la muntanya balla is one of the delights of this season because it's a reflection on the profound strangeness of reality, because it's an extraordinary mixture of the innocent gaze and precise technique, or perhaps simply because Solà once again seduces us with her exultant ability to write about memory, knowledge and life in a world of its own with enthusiasm and joy.” — Ponç Puigdevall, El País

"I welcome the first Catalan writer born in the 90's who deserves applause due to necessity, and not paternalism." –Vicenç Pagès Jordà, El Periódico

"A fantastic novel, in every sense of the word. A tremendously poetic story in which tragedy and redemption go hand in hand. Irene Solà is a very young author who is very much worthwhile." –Óscar López, Cadena Ser

"Canto jo i la muntanya balla is luminous and exciting (...) it is a confirmation of narrative talent, study, composition, and lyrical force (...) Solà blends history, legend, reality, literature: everything is transformed into flesh and blood" –Julià Guillamon, La Vanguardia

"The characters in Irene Solà’s second novel know how to look where the light doesn’t shine…They are voices from the Pyrenees that the author breaks down into chapters, forming a wonderful collage…Canto jo i la muntanya balla is an extraordinary novel in every sense of the word, remarkable, unusual…There is beauty in every page and a boundless passion for writing, for the stories and landscapes she narrates, for the creatures she has created" –Andreu Gomila, Time Out

"Canto jo i la muntanya balla is a formally brave, intelligent, and organic novel in which the protagonist, in a way, is a mountain…this rural collage is a great second novel" –Irene Pujadas, ARA, Book of the Week

"A polyphonic novel, in which every chapter has a voice and in which a story is constructed through many narratives. If Els dics was already such a discovery, this second novel consolidates Solà’s career" –Magí Camps, La Vanguardia

"Solà writes with joy but not with lightness—the deep joy of one who knows they've read enough to write about the mountain without falling for any of its traps." —Tina Vallès, VilaWeb

"Irene Solà has written a novel of the mountain where humans, the animal kingdom, and the vegetable kingdom share the spotlight, linked to each other through an original essence that comes from the narrator's voice. The author sings with brave and unusually expressive language, with which she dances to both the most tangible reality and that which can't be seen. The reader dances too, seduced by the party of points of views and the virtuous prose that never fails to excite us." —Guillem Gisbert

"The author brings us into a feral nature with humor, with violence, with a robust delicateness. Where nothing is extra, always with a unique voice." —Esteve Plantada, El Temps

"Beautiful. It seems like a fable, an ancient story; it has a careful, sensible, and poetic language, and, at the same time, it's a crude story full of artists, like a mountain. Without you noticing, it makes you dance to its rhythm from one chapter to the next, and you don't want it to stop." —Dolors Boatella, La Vanguardia

"The novel starts out very strong, forcing readers to fully immerse themselves in that part of the world." —María López, Diario de Mallorca

"The novel assumes an air of timelessness perfect for its objective: constructing a story that always hooks the reader no matter when it is read. And I think that it achieves this, by far." —Enrique García Fuentes, Hoy Extremadura

"A novel that gives voice to those who could never tell their own stories." —Gemma Marchena, Última Hora

Irene Solà (Malla, Spain, 1990) has published the novel Els dics (L’Altra Editorial, Premio Documenta 2017) and the book of poems Bèstia (Galerada Edicions, Premio Amadeu Oller 2012), translated into English as Beast (Shearsman Books, 2017). She is part of the anthologies Mig segle de poesia catalana, del Maig del 68 al 2018, edited by Vicenç Altaió and Josep M. Sala-Valldaura (Edicions 62); Wretched Strangers, edited by JT Welsch and Ágnes Lehóczky (Boiler House Press), and 33 poetes de menys de 35, edited by Josep Pedrals (Universitat Oberta de Catalunya). She has a degree in Fine Arts from the University of Barcelona and a Masters in Literature, Film and Visual Culture from Sussex University.  Solà has been a writer-in-residence at George Mason University in Virginia in October 2018, and has been one of the artists selected by the Barcelona Producció-La Capella program in 2017. She has also received a Literary Creation Grant from the Government of Catalonia, the Young Art Grant 2015 and the City of Vic. Her texts and works have been exhibited and read at the Centro de Cultura Contemporánea de Barcelona, the Whitechapel Gallery (London), Bòlit (Girona), MAC (Mataró), at Jerwood Arts (London), and at the International Poetry Festival of Sant Cugat, the Fiesta de la Poesía in Sitges or the Festival Poesía i +, mong others. Her work has also appeared in the maganizes Poetari, The Lighthouse Literary Journal, Time Out, Granta Magazine and Murder Magazine.