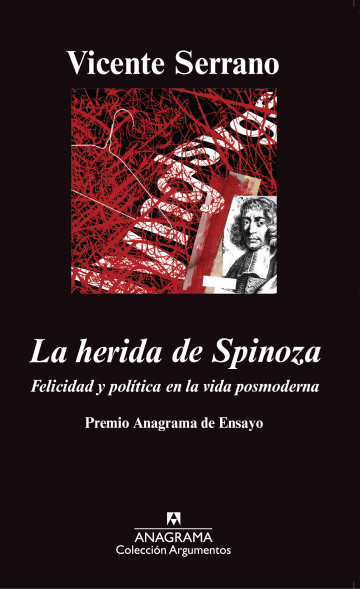 Many essayists spend their entire careerslooking for a subject. This essay not only finds its subject, but also takes the luxury of exploring it in exceptional detail. That subject is happiness. However, La herida de Spinoza is a book of philosophy, not a self-help book. It begins with some recent discoveries in the field of neuroscience, particularly the investigation of Antonio Damasio in regard to the misconceptions regarding the secular division between the mind and body. Damasio based his research on the ideas that Spinoza described in his book ‘ The Ethics’. For Damasio, the calm acceptance of death, one of the signs of identity of Spinoza’s ethics—in fact, the ‘injury’ of Spiñoza—is “irritating”. This seems like an innocuous comment by Damasio but for Vicente Serrano it isn’t: instead it points to a kind of ‘dis-adjustment’, to a strange incomprehension of Spinoza’s ethics. From that starting point, the author criticises not only that and other mis-readings of Spinoza, to move on to a wide-ranging critique of modernity and also of postmodernity. La herida de Spinoza becomes then a revision of the entire history of philosophy in that area where ethics and metaphysics (or ontology) are superimposed. Although the project seems overpowering, the author assures us he is well prepared. On one hand he suppresses the academic apparatus, which allows him to be more brief and direct, and on the other, he uses a notable erudition and, above all, an unusual capacity to explain. If we had to find comparisons for this ability, we should look no further than Rüdiger Safranski. The author, however, does not write biographies, nor even a ‘history of philosophy’ as such, instead he constructs a philosophical conversation with some of the greatest thinkers in history. The essay is completed with the inclusion of a masterstroke: a study of feeling. Feelings are philosophy’s answer to the problem of bio-politics. The progression of modernity does not only imply the disappearance of nature, but also the absolute substitution of feelings for will. If the return to nature is impossible, and even undesirable—given that nature was never a mere metaphor—, Serrano is inspired by Foucault to propose a “return” to feelings as a fundamental path towards closing a reflection on the nature of power.

«An essay in the most flexible definition of the term, a work that is half way between reflection and literary story… well thought out and well written. Much better than what we’re used to» (Gabriel Albiac, Leer).

«The theoretical question at the base of this essay— what role does religion play and what problems of existential understanding does, or did, it address?— is both a complex and a passionate subject. Vicente Serrano offers a good philosophical introduction to the subject in La herida de Spinoza, recent winner of the Premio Anagrama de Ensayo… Serrano explores the post-modern consequences of the abandonment of religion: a more suggestive subject that the refutation of churches...» (Fernando Savater, El País).

«Situated like a paddy field bordering a delta that contains all of philosophical modernity, Serrano’s work analyzes without pedantry or false obscurities, the reflections provoked by the idea of religion, desire, nature, hope, progress, power and happiness» (Juan Malpartida, ABC).

«Those who read it will be fascinated. And hopefully, there will be many thousands of them» (Félix Soria, La Voz de Galicia).