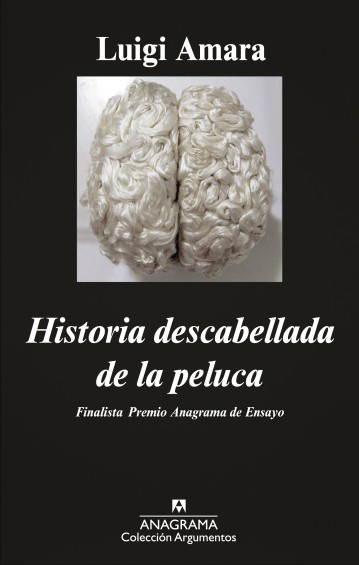 A Hair-brained History of the Wig

«Hair is one of those small things that no one thinks about, but which has the power to change entire cultures.» The quote comes from the autobiography of Keith Richards, guitarist with the Rolling Stones, but could also have been the first line of this unclassifiable book that, with an excessiveness that occasionally verges on the fetishistic or even the provocative, takes a look at the fraudulent and prosthetic, as an oblique way of elaborating a picture of Western civilization. Mammalian and artificial, a plaything of the ego which has become a sign of power and the accompaniment to a malleable idea of beauty; both a disguise and simulation, the wig has accompanied the search for identity as well as a parody and irreverence and even, until recently, despite its manifest ridiculousness, it has fulfilled a ritual function within the British justice system, and in another age made the flamboyant and useless fashionable. But fake hair is not just a powdered eccentricity from another age:it is a synthetic doorway to an ephemeral freedom, or a dead body worn as a kind of replacement. The wig today isas present at parties as it is at chemotherapy clinics, aspopular with criminal gangs as it is with pop groups, present in both transvestite fantasies and contemporary art. With a humorous eloquence that does not avoid profundity, Luigi Amara explores the curious episodes in which the wig has been a protagonist throughout history. Ignoring chronological order and instead creating a mosaic or tapestry, the book creates a gallery as obsessive as it is disconcerting: one of the successes of this Historia descabellada de la peluca, whose methodology, like the books of miscellany of old, consists in creating juxtapositions of anecdotes that propitiate and focus reflection, traced with the ironic lucidity of someone who reveals himself to be a sagacious observer.

«A mosaic-book, within which we encounter queens, philosophers, politicians, the Nazarene from Cádiz –better know as the Hairy One-, fictional characters, like the transvestite protagonist of the novel The Tenant by Roland Topor, and real people, like André Agassi or Salman Rushdie, who, after adopting the identity of Joseph Anton to escape the Fatwa, started wearing a wig which had arrived one day in a box, resembling a "small sleeping animal"» (Xavi Ayén, La Vanguardia).

«It is a challenge to summarize the richness of this book, which in a little more than two hundred pages, describes the story of wigs from antiquity to the present day, with special emphasis on the chapters dedicated to the wild and hairy nights of the Empress Mesalina, the movements, in various attires and hairpieces,of the fascinating Father of Choisy, and the authentic nature of Andy Warhol´s false hair, who, with the famous blond wig that gave him the air of "an unclassifiable effigy and shabby scarecrow" managed to create the most durable art installation of the XXth Century… Amara is an excellent and exuberant writer» (Vicente Molina Foix, Tiempo).

«Luigi Amara is one of the most original essayists on the Latin American scene. Possessor of an agile pen, a sharp humour and a knowledge that is as encyclopaedic as it is unexpected.... Historia descabellada de la peluca constructs a cosmetic history of the West… Amara has built a beautiful cabinet of curiosities to contain a history that, paradoxically, is completely contemporary… A book full of life, an explosive book about the deceits and the carnival of our most private fetishes» (Carlos Fonseca, Revista Otra Parte, Semanal).

«Luigi Amara amazes us with his book Historia descabellada de la peluca, a collection of essays which become a discourseon disguise and the nature of identity from an aesthetic, philosophical and literary perspective…. Here he speculates about the use of the wig, from ancient Greece to the impostures of Art Pop and, consequently, also discusses the history of flowing locks and bald patches. The erotic, mortuary, religious, criminal and authoritarian facet of fake hair, its qualities as a fetish and relic, its position as an ideal of beauty, of cross dressers and horror are revealed in unexpected dimensions…. From Shakespeare to Alan Pauls, from Suetonio and Quevedo to Margo Glantz, its ample spectrum of readings give body and volume to the free and always entertaining digressions, which follow the same path…. Amara convinces us that the wig is a vital object to study to understand human pretensions.» (Marcela Fuentealba, Revista Paula).

«A provocative and original essay, which can be read as a human comedy in which Voltarian satire hides under a wig of capillary plagiarism.» (Antonio Bordón, La Provincia).

«An author who, with cheek, research and a dose of reflection, has produced a text that unites poetry with philosophy.» (Ángeles López, La Razón).