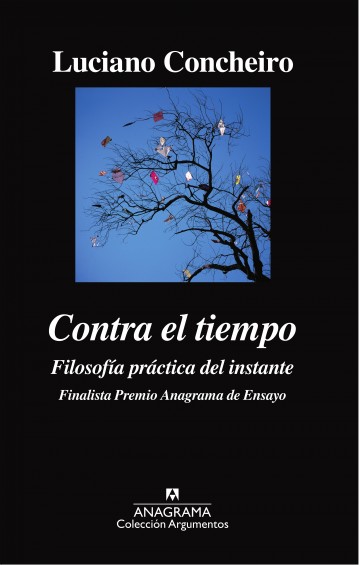 Against Time. Practical Philosophy of the Instant

We live in fast times, up to the point where, as this author points out at the beginning of this lucid essay: «If I were forced to identify one feature that defines the age, I wouldn’t hesitate for a second:  I would choose ‘acceleration’. That is the phenomenon that largely governs how economics, politics, social relationships, our bodies and minds now work. The increase in speed is the prism through which, without relying on reductionist perspectives, we can see —and maybe understand– better the world in which we live in today.»

Luciano Concheiro doesn’t limit himself to meditative contemplation and the placid celebration of the apparently trivial: his analytical approach goes further, exploring a capitalism obsessed with permanent profit, politics ruled by short-termism and the contemporary societies that generate stressed and anxious individuals.

This, then, is a book that analyses the concept of velocity in its economic dimension—programmed obsolescence, the Toyota production model and the frenetic pace of consumption orchestrated by Zara, digital realties that call for permanent actualization, the accelerated flows of speculative capitalism…–, politics –hasty decisions instead of deliberation, destruction of an opponent instead of ideological debate, which we could call the House of Cards model…– and social –the consumption of tranquilizers and stimulants, the volatility of relationships, professional uncertainty …–, all lead to a situation where we are facing a world where it is impossible to create a narrative that helps us to live a balanced life, because  haste strips life of meaning.

To break through this dictatorship of speed, the author proposes an intimate revolt through a philosophy of life based on an experience of time in which time ceases to pass, which he calls: «The Philosophy of the Moment». He constructs this process of tangential resistance through the teachings of thinkers and artists like Bachelard, Suzuki, Duchamp, Cage, Furio Jensi and Gabriel Orozco (a series of photos of this photographer, Mexico’s most important living artist, accompanies the pages of this book like a visual kōan. The result is a concise essay full of critical intelligence.

«Concheiro, at the age of only 24, opens up the machine to let us look inside, analysing the history of how machinery has affected human life from the XIXth Century until today and how it has stolen our oxygen and security. This young Mexican describes the age we’re living in with the style of Byung-Chul Han or Gilles Lipovetsky, in order to synthesize the diagnostics and possible treatment for the illness of the age. Concheiro sees philosophy as a way of discovering the good life, cleaning the glasses with which we look at reality to change our vision of a world which, neither economically or aesthetically, we are capable of transforming. This change in the way we look at the world is the answer to the philosophy of the instant. Only in the times in which we are not actually living in, but in which we aspire to exist, can we find the tangent of the system. Contra el tiempo isn’t a revolutionary book, instead it is a manual about how to play hide and seek, to help us escape from accelerated rules» (Pilar Torres, La Buena Vida).

«At a time when too much is published, but quality authors are thin on the ground, Concheiro rises above the rest because he shines the light of his thinking in the face of the mental laziness that surrounds us. If literature is a long-distance race, well, Concheiro is in front. It doesn’t matter that behind him are others who have spent a lot longer than him dedicated to this task.  Because what Contra el tiempo affirms, among other subjects, is that from now on our current way of life has been left behind.  (In every sense, but above all in literature).  Some of us will remain stuck in the past and very few of us will be able to survive in this new era. It’s harsh to say, but we have gone beyond the way that we understand the literary apparatus. It is interesting that the first significant product of the generation born in the nineties is not a novel, but an essay that offers a reading of time like the one proposed by Kerouac in the raw version of On the road. Contra el tiempo is a solid work created by a precocious author. At only 24, Concheiro has managed to achieve something extraordinary.  Good literature proposes problems. Contra el tiempo proposes a predicament» (Carlos Velázquez, La Razón).

«In contrast to the famous dictum offered by Saint Agustine: "if they ask me about time, I don't have an answer. If they don't ask me, I do",  Luciano Concheiro has managed to get to the bottom of what time is in order to demonstrate that today's tragedy is based on its forced acceleration, with no other reason than demonstrating the frenetic and unstoppable game motivated by its own perversion»  (Mario Bellatín).

«This magnificent essay synthesis the tensions inflicted upon us by today’s turbo-capitalism, offering a creative antidote to the accelerated world we live in; an acceleration that leads to the fragmentation of our world. Yet within each fragment exists the possibility of recovering the moment.  In this essay Luchiano Concheiro burns that moment into existence, dissolving his identity intimately but subversively into the body of his argument. An extraordinary intellectual achievement» (Roger Bartra).

«There are few pleasures greater than to witness the subversive challenges to the neuroses of post-capitalist over-production that are so deliberately and calmly constructed by Luciano Concheiro in this book. The author gives us the tools to criticise, that is, to put into crisis, that permanent and always indignant urgency that seems to afflict us all today.  To those who would like to literally pause for a moment to savour the hopeful intelligence of this author’s argument, I salute you in advance for making such a brilliant investment of your time. The results will become clear when you are able to shake free from the chains of media domestication and enslaving absence» (Abraham Cruzvillegas).

Luciano Concheiro (Mexico City, 1992) studied History at the Universidad Nacional Autónoma de México (UNAM) and Sociology at Cambridge University.  He is a professor at the Faculty of Philosophy and Letters at UNAM. He is a co-author of the book of interviews El intelectual mexicano: una especie en extinción (Taurus) and he has translated essays by authors like Franco Bifo Berardi, Michael Hardt and Slavoj Žižek. He is currently the chief editor of huun, an annual publication about art and Mexican philosophy.