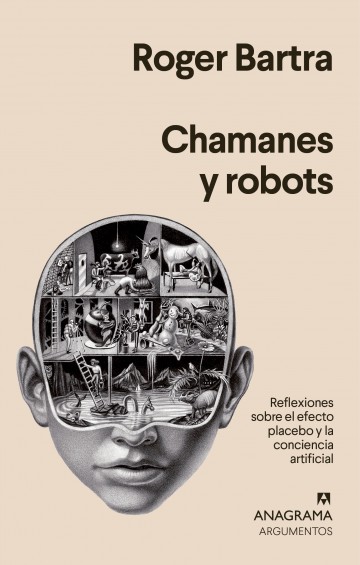 This stimulating essay explores the present and the future of humans and robots by combining the cultural and biological dimensions.

There is a thread that connects the thought processes sparked by a shaman or a doctor in the mind of a sick person who wants to heal and the mechanisms used to give robots something that resembles consciousness. This connection between shamans and robots is established through pleasure and suffering. Healing rituals used by doctors and shamans are destined to diminish or eliminate the pain that humans endure and give them pleasure. On the other hand, artificial intelligence and robots are tasked with reducing fatigue when they work. But the problem that engineers face is that machines lack sensibility, and without it, the existence consciousness seems unlikely. Therein lies the paradox: conscience is based in suffering, but we humans are committed to diminishing or even eliminating it. Today’s robots are machines without feelings that don’t suﬀer, and it would therefore seem like they can’t have a conscience. But will it be possible to give them one in the future?

«One of the few Mexican intellectuals that has managed to dialogue with himself in the academic medium of social sciences, unfolding as an author and critic, writer and reader, subject and object of his permeable anthropological meditation»  (Rafael Rojas, Letras Libres).

«Bartra puts us at the gates of a new critical space» (Christopher Domínguez Michael, Proceso).

ROGER BARTRA (Mexico City, 1942) has a PhD from the Sorbonne in Paris and is currently an Emeritus Researcher at the UNAM. He has been a visiting professor at the University of California San Diego, Johns Hopkins, Pompeu Fabra, Rutgers, Stanford, and Wisconsin, as well as at the J. Paul Getty Center in Los Angeles, among other places. He has published books about European mythologies such as El salvaje en el espejo, El salvaje artificial, and Las redes imaginarias del poder político; about the national identity crisis, such as La jaula de la melancolía and La sangre y la tinta; about the myth of melancholy in the Western world, such Cultura y melancolíaand El duelo de los ángeles; and about the links between cultural heritage and neural networks, such as Antropología del cerebro.