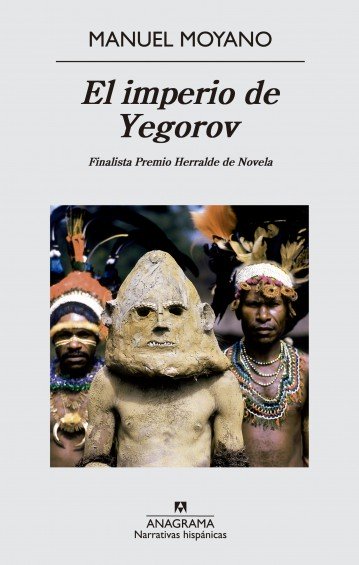 Celsius Award 2015 to the Best Science Fiction and Fantasy Novel at the Noir Week of Gijón.

In 1967, Izumi Fukada, an attractive Anthropology student, catches a strange disease in Papua New Guinea while on a Japanese expedition to find the lost Hamulai tribe. This sets off an unpredictable chain of eventstaking place in Japan, the United States and ends, 75 years later, in a dystopian nightmare. This is crime fiction, a political thriller, a social satire and a science fiction story –all in one-; The Yegorov Empire captures the reader by its bold technique, its original plot and intense style. A «rock opera» full of characters such the doctor Yasutaka Mashimura (also known as Perseverance), the missionary Ernest Cuballó, the poet Geoff LeShan, the actress Lilian Sinclair, the police Walter «jerk» Tyndall, or the lawyer Alexandr Shabashkin (aka Jackal). This is not only an ironic novel, but it also represents a reflection on how ephemeral the human existence is and -quoting the journalist Basil Graham- «it gets a very accurate approximation of the facts in the story». Manuel Moyano, already well known as a short story writer, with The Yergorov Empire, will delight the reader with his unique talent, full of imagination, as a novelist.

«This year’s runner-up for the Premio Herralde, with its narrative skill and precise structure, is splendid [...] Everything in the novel seems distant. However, everything we read is incredibly familiar to the world we inhabit! From the first text, the diary written by a gallant lover on an expedition to Papua New Guinea in the 1960s—the Golden age of anthropology—to the strange atmosphere of the other texts which tell more stories of life, this is a book full of irony and parodies of styles that are common in the world of communication. A biting satire of contemporary attitudes and thought» (Lluis Satorras, Babelia, El País).

«One of the narrative events of 2014… Manuel Moyano has already provided some incredible flashes of his talent as a storyteller, but with El imperio de Yegorov he comes close to greatness … A novel of adventures, a thriller and a work of science fiction that explores the myth of immortality… Told in a very intelligent way, through letters, dialogues, e-mails, recordings… It´s been a while since I´ve enjoyed reading a book as much as El imperio de Yegorov… Manuel Moyano is an exceptional writer. We are witnessing the arrival of one of the most important talents of the XXIst Century» (Luis Alberto de Cuenca, RNE).

«The outstanding debut of Manuel Moyano, runner-up for the Premio Herralde. Ironic science fiction… El imperio de Yegorov is not really a futuristic fantasy, because here the dystopia is only an excuse to tell another story. What makes this book stand out, aside from the humour and irony, which are important, is its structure, which becomes essential to understand its special fascination and excellence. Manuel Moyano has constructed a narrative through documents of reality. The result is a collage, which feels like a thriller… Moyano reveals his skill and knowledge of narrative technique and he uses that to great effect… A magnificent first novel» (Juan Ángel Juristo, ABC).

«A story that draws you in and never lets you go… Its form is perfect, despite its complex internal structure; and the story flows gradually until the last page. Interviews, obituaries, e-mails, testimonials, notebooks, detective reports, etc., are the pieces of this narrative jigsaw. Each piece fits together in a way that is coherent enough to easily avoid the risk of fragmenting the narrative, which is written with precision and a few doses of black humour» (Íñigo Urrutia, El Diario Vasco).

«A notable exercise in narrative brevity: reducing to less than 200 pages what in the hands of Ken Follett would have run to over a 1000… A book to read in one sitting, as it immediately traps you and keeps a hold. A book that feels so graphic and direct that, occasionally, it´s impossible to shake the feeling that you´re actually watching a great action film.» (Luis Matías López, Público).

«Disturbing and perverse, the runner-up for the Premio Herralde is a truly singular novel and a brilliant exercise in style… A challenge to literary orthodoxy … An original book that you will read in one go in a couple of hours and will probably leave you wanting more » (Miguel Artaza, Bilbao).

«A superb futuristic novel, serious and fun at the same time, which is this author´s trademark; his best book… The jury of the Premio Herralde must have noticed the merits of a book of extreme originality, full of voices and messages, very different to what is being offered by contemporary Spanish fiction… A story full of modernity, very contemporary, groundbreaking… With this story, Montoya´s reign begins and it looks like i´s going to be a long one.» (José Belmonte, La Verdad).

«It surprises with its original structure, based on a series of documents that start revealing the plot: diaries, letters, police reports, interrogations, recordings, e-mails, blog posts, wills, news and even the instructions on a medicine bottle… Every element is relevant, calibrated and measured, likeall of Moyano´s best stories, a genre that shows enormous mastery… An ambitious work about jealousy, love, rejection, and the search to stop time through beauty. Something which can be found in the epic of Gilgamesh, Oscar Wilde, Virginia Woolf, Borges, Asimov and Saramago, among others. But, Moyano uses other means to give this story a postmodern twist. In his pages, full of irony, there is a ferocious criticism of a society that prizes physical beauty and youth above all else. A delicious read, full of surprises, that can makes us enjoy ourselves in the way that only the best literature can» (Ricardo Reques, Córdoba).

«From his very beginning in literature, Moyano has set a style, a way of writing that can be easily recognised. Among his main ingredients, neatness and accuracy with the words, a taste for extraordinary things, and stubbornness for being original» (José Belmonte Serrano, La Verdad).

«He is not afraid of being compared to Borges, because he knows –there is not bigger compliment- that most of his own stories can resist those kinds of comparisons» (José Luis García Martín, La Nueva España).